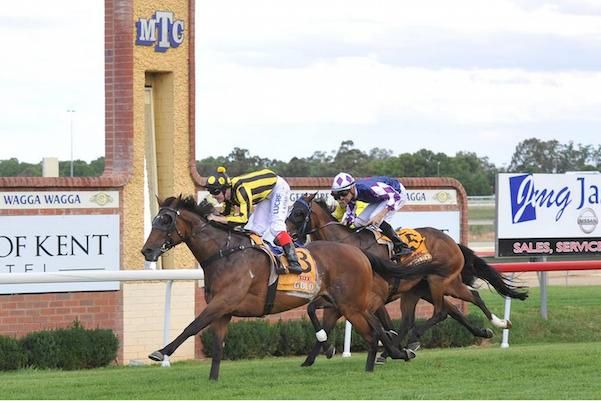 TODD Smart’s dream start to his training career rose to another level on Tuesday as Art Thou Ready captured the $25,000 Ted Ryder Cup (1600m) in commanding fashion.

Art Thou Ready stamped himself among Southern District’s elite with a dominant performance in the region’s Summer feature for Smart and Wagga jockey John Kissick.

Kissick produced a top ride from an awkward gate and had Art Thou Ready ($5.50) camped just off the speed and the horse did the rest as he wound up and powered to victory by ¾ lengths, from Gunner ($7.00) and Life Of Reilly ($7.00).

It continued an amazing start to Smart’s training career and provided him with the prestigious Ted Ryder Cup just seven months after moving to Wagga and taking out his licence.

Art Thou Ready carried the colours of the great Gundagai galloper Carvalin and Smart’s beloved Gundagai Tigers, in front of plenty of his family and friends.

“Words can’t describe it, it’s such a thrill.

“All my family has come across here today and in the Gundagai Tigers and Carvalin colours.

Veteran Wagga 10-year-old Gunner ran another cracking race and it took until the final 100 metres for Art Thou Ready to claim him.”I’m just happy this horse is befitting of the colours.”

Grand Allowance ($7.00) again missed the start hopelessly and gave himself no chance, while Yet Tobe Convinced ($6.00) ran an honest fourth.

Art Thou Ready is a two-time city winner that has now back at his best with Smart.

The six-year-old, owned by Martin Hay, David Tout and Greg Hindmarsh, has now won three of his five starts under Smart’s care.

“The horse is in a happy place, and that’s all you can do with old horses.”

Art Thou Ready is now likely to head to the spelling paddock, with the Wagga Gold Cup carnival in mind.

Smart is in two minds as to what to target Art Thou Ready for.

“I’m not sure whether to go to the Town Plate or stretch him out for a Gold Cup.

Smart, Kissick and Art Thou Ready has now claimed the Stan Sadleir Stakes at Wagga, the Christmas Cup at Albury and the Ted Ryder Cup.