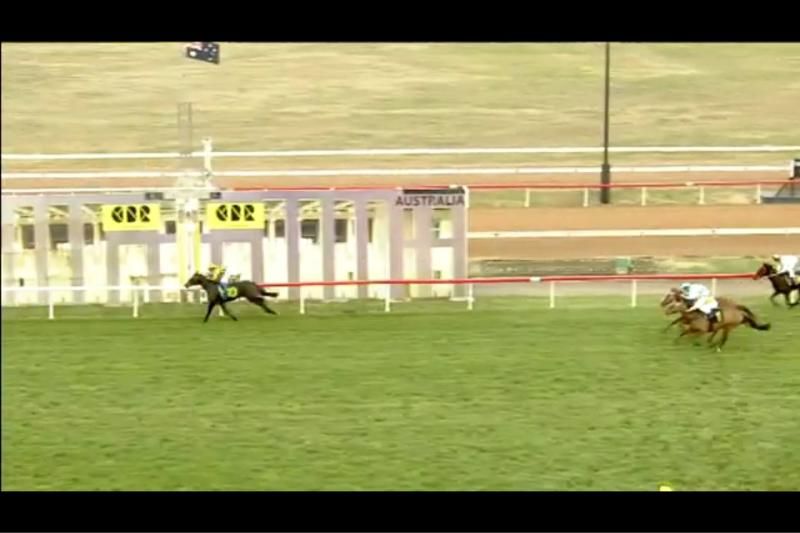 They say no hoof no horse. So was the case with stable acquisition Attainment. The horse was originally bred by Darley & trained by group-one winning trainer Peter Snowden, however the horse would never start under Snowden.

The horse then became part of the Godolphin operation when they took over from Darley. The gelding now under the care of trainer John O’Shea failed to light up the track in five starts for Godolphin.

The horse was deemed a project horse that wouldn’t fit into the time management of such a big operation as Godolphin. The next step would see the horse sold through public auction, just three days later, after its fifth race start.

Attainment went through the 2015 Gold Coast Summer Racehorse Sale at Magic Millions on the 13th of January 2015 and was knocked down to Albert McAlister for $15,000, a retaining owner & managing owner, of the now four-year-old.

Smart has worked tireless with Attainment, predominately with the horse’s hoofs. Stride by stride, Todd has given the attention the horse needed to blossom into a handy/successful racehorse, evident by today’s crushing victory at Canberra in BM70 grade.

Attainment has had his hoof on the till since joining Zakynthos Lodge at Wagga Wagga, running 10 placing’s from 12 starts before breaking through at start 13 for Smart. It was the reverse way of going to Sydney at Wodonga that took the monkey of the horses back when partnered by stable jockey John Kissick.

Prior to today’s Benchmark 70 win, Attainment ran a slashing second at Rosehill in a $40,000 Highway C2 over 1400-metres to King’s Officer, with that horse winning again in a Highway C3.

Attainment was to run at Goulburn the past Monday the 20th of June but was another horse that missed out due to the meeting being abandoned. With plenty of meetings around the Southern-district getting abandoned, Smart opted for Canberra accepting for two races a BM70 over 1300-metres & a BM55 over 1400-metres. With the Heavy 10, lightweight, small field & good barrier, the BM70 became a realistic option.

A small field of 10 accepted for the BM70, but a scratching would make it 9. Attainment drawn (2) began very well and was quickly into stride under apprentice Miss Melinda Kinny. Passing the 1000-metres outsider King Derota applied pressure to Attainment sitting outside it for a furlong, but Kinny didn’t panic giving Attainment a little bit of rein and allowing him to stride. It was a confident and telling move. Passing the 800-metres Attainment was cruising in the lead with race favourite Ziganui a horse touted as racehorse of the year at Canberra some 7-lengths way in 7th spot, and seemingly a long way behind. At the 600-metres Attainment was allowed to go with his lightweight 52Kgs, 2kgs below the minimum.

As the field straightened for home, there was only one horse you wanted to be on and that was Attainment. The four-year-old gelding by Commands cornered magnificently and was out by 3, race favourite Ziganui was a mile back in the ground a Heavy 10.

At the final furlong it was all parcelled up with Attainment set to score his biggest victory to date. Out by 4,5 lengths Attainment was getting further in front. On the wire it was an official 6.5Lengths. Miss Melinda Kinny had ridden the perfect race. She lead, dictated, and dominated to perfection.

And had this to say.

“He has confidence now this horse, he knows he’s running without pain in his feet.”

“I still haven’t got him right.”

“I really think this preparation is going to set him up for hard tracks in summer, because his feet are starting to get right now.”

“It was a good ride, a good confident ride.”

The stable couldn’t be happier for connections & the horse.

Click on the video below to see Attainment lead all the way in the Genki Sushi (BM70) & Sky presenter John Scorse interview Todd Smart post race.