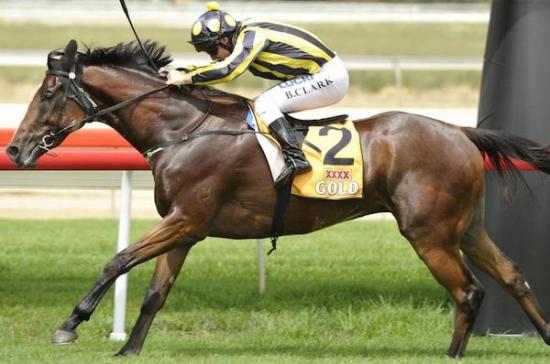 By Racing and Sports

Trainer Todd Smart is counting down the days until Reka Outlaw steps out in the $100,000 SDRA Country Championships Qualifier at Wagga on March 15.

For the 32-year-old, only licensed in July last year, it represents the Holy Grail of his training career to date.

“It’s a great opportunity, even to have a runner in it,” Smart said. “To win it, and I dream about it, would be a fabulous start to my training career and unreal to win a race like this for the owners.”

Reka Outlaw a lightly raced five-year-old gelding and the winner of four from 15 starts – two for Smart since being transferred from Dave Blundell – is owned by Tommy Arragon and David Tout from Gundagai.

The son of Antonius Pius was bred by Arragon from the Eire broodmare Sister In Law.

Smart has been friends with Tout for many years.

“David actually got me a start with John O’Shea when I first started out,” Smart said. “After that I spent seven years with Colin Little and a year and a half with Lloyd Williams in Melbourne before I took out my own licence.”

The Championship plan for Reka Outlaw has been in the making for many months and “so far so good” insisted Smart.

“The horse is going great. I couldn’t be happier with him,” Smart added. “I’m going to give him a trial at Albury on Friday to get him right where I want him.

“He’s ticking along perfectly. I’ve never had him in better condition.”

Smart admits to a “learning curve” with the gelding when he had his first preparation under the Wagga horseman.

“The first preparation was like a ‘get to know you’ exercise,” Smart said. “I found out one thing, he’s got his share of ability. He can be a funny horse, certain things he likes other things he doesn’t. He’s got his little quirks but we’ve sorted that out.

“He likes to be left alone but loves stable life.

“I’ve got to thank my jockey Brad Clark. He’s done all the work with him. He loves the horse.

“I can’t wait to get to the race and neither can Brad.

“The horse is doing everything right. I’ve got him cheery ripe. We just hope he’s good enough.”

Reka Outlaw resumed from an eight week break to win over 1200m at Wagga on January 9.

“The plan was always to go into the Championship race second up,” Smart added. “He needed to win that race at Wagga to get his rating up and everything went accordingly.”

Meanwhile, Home and Away star Jake Speer will be in familiar territory as special guest of Murrumbidgee Turf Club at the Championships raceday.

Speer plays Oscar MacGuire in Channel 7’s popular TV show, having been born and raised in Leeton in the Riverina region.